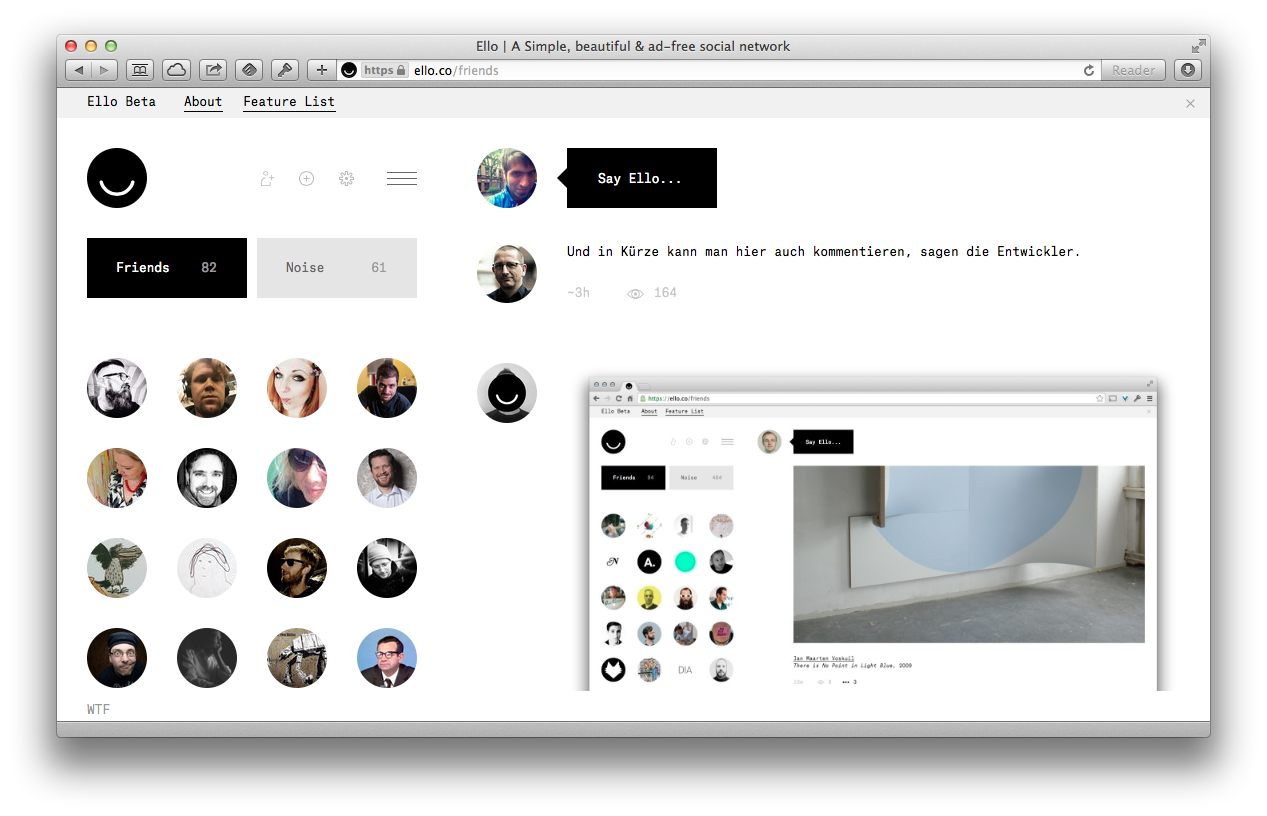 The last social media service, I got (at least) a little excited about has been tent.is (now cupcake.io), used by about a dozen people. The concept to build an open protocol as a fundament for many services seemed noble and for me it was much more appealing than diaspora.

Well, ello.co isn’t open, but it’s as its claim is promising: simple, beautiful and ad-free.

As some people wished for Twitter and as app.net tried, ello aims to build its business model around Freemium:

From time to time we offer special features to our users. If we create a special feature that you like, you can choose to pay a very, very small amount of money to add it to your Ello account forever.

We’ll see, how that works out. Ello is currently very beta and thus lacks of a lot of features (some of them gotta be free) and it’s vividly discussed on elli, if its minimalistic (featureless) state isn’t also a strength of ello. For example there is currently nothing like retweests or shared items that spam the timeline.

Reactions on Ello about Ello vary between: wake me up as soon as it’s working and take good care about Ello, it already grow dear on my heart. I will definitely try to keep faith with Ello for a while, since not only it’s minimalism is a a nice change to Facebook and Twitter, also noise is virtually banned in a separate tab. And while I manage Twitter pretty well with private lists and am quite thankful for Facebook’s arbitrary filtering, on both channels there is still a lot of automated content, ads, spam, noise and redundancy on those channels. If not for more: it’s pretty relaxing to follow just a couple dozen people who are – yet – pretty attentive on what they post. And it has been a great opportunity to just follow a couple new pepz, I didn’t already knew from elsewhere, which has is own appealing.

Long story short: My first impression of Ello is quiet pleasant. Yes, it’s very beta. But it is very neat, very unobtrusive and most def got some potential. … Good Luck, Ello. Hopefully you don’t end up too soon on this list of services I actually really liked to use, but which I don’t really use anymore: